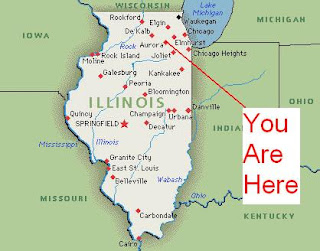 It's odd how this integration works. I'm posting more often here and not the other place (look to your right) and it seems a pretty natural progression. I think we decided for good the name of this thing we're working on. Illinois.

Illinois is the title of the imaginary CD I was working on in my head. Upon proposing the name as an option, these guys I play with all were very protective of this thing I've been playing with for so long. It serves as the finest tribute of their affection for me that they wanted to guard the things I care about. The truth is, Illinois was a side project and a remnant from a time when I needed a side project. I don't anymore and I told them that. This is a pretty big complement that they would let this be my side project and my heart in name, as well.

I still record these demos and maybe I'll put them out as demos and works in progress to be heard at some point outside of MySpace, but who needs it? Maybe there's some curiosity about the process, but as long as I'm a part of SST, it's all I have to give and my name is on it-it's a representation of who I am in the best context, with these people I love. You have all my focus and I want my name to be synonymous with Small Shiny Things. My ego doesn't demand Kevin Trudo to be on the cover of the album if its all over the work inside.


Another great opportunity of love was Tony. He called me yesterday to apologize for being a voice of dissent on Thursday.

The back story: Lately we're having a lot of talks about the choices where guitars work. On "A Little While" there's some phenomenal lead work Bucky's contributing and we have been recording several takes and then arguing out what sticks. I seem to be making some unpopular choices as Tony began to refer to the playbacks as "the stupid take"s. I'm pretty sure he told me I'm tone deaf.

Well, he called to tell me that he didn't mean to offend and while that speaks to his considerable integrity, it's not anything I need. I think it says the right thing that we're past polite. If you love me you never need to lie to me. Loving me doesn't mean you'll never hurt my feelings, it means that I can be ok with it because I know all the good stuff behind it. It means that we have the trust and respect to look for honesty and not just cheer leading. Thanks Tony, I may be wrong and you may be right, I'll just always know you're fucking wrong. But the great thing is that we have a place between us where that's an ok thing and we can both fight about it and disagree, but passionately support each other in our differences.

I fully support an entire room full of people's right to grossly underestimate stupid solo #1. you are all wrong, you know.
Posted by Kevin at 12:16 PM

Do You Know Who We Used To Be?

Places To Go And People To See